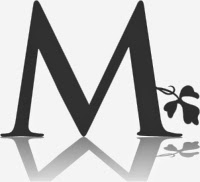 And a trick for instant manifestation...

Over the years, there's been a lot written about the importance of visualizing your goals and the Law of Attraction. The whole idea is that in order to get what you want, you need  to focus on what you want.

Some times it's a hard concept to work through, which is why I found Doreen Virtue's ideas in her article "How to Manifest Instantly" so helpful.

"...you have the God-given power to heal and manifest anything you need for your life purpose. The study of this ability is called Hermetics, based upon the ancient love-based Hermetic teachings (not to be confused with some fear-based teachings which aren't genuine Hermetics). The real Hermetic teachings are completely aligned with God's will.  One of the principles of true Hermetics that has helped me the most is called "The Principle of Polarity.

The Principle of Polarity could also be called “The Principle of Practicality,” since it offers a profoundly practical tool for living, manifesting, and healing. It’s based upon the Hermetic principle that everything has two polarities or extremes. Hermetics is the ancient study of how we are all in the mind of God, and that thought energy changes everything. These seeming opposites are part of the same pole, and they’re just situated at different ends. For example, hot and cold are extremes of the pole called “temperature.”

In between the two polarities of hot and cold are countless degrees of warmth and coolness. It’s the same way with every apparent opposite: hard and soft, noisy and quiet, light and dark, good and bad, love and fear. When you find one thing, you’ll also find the potential for its opposite.

The Principle of Polarity empowers you to transmute an undesirable situation to the other end of the pole and manifest a desirable situation. If something undesirable is present in your life, it means that its “opposite” is also present. This principle works by lifting your mental vibrations to a higher level to banish the undesirable and attract the desirable. Let’s use the example of money. One end of the money pole is “prosperity,” where you have as much money as you could possibly desire. “Poor” is at the other end, where there isn’t enough money to meet your needs. In between these two extremes are countless financial situations in between poverty and prosperity."

Doreen shares this picture to help illustrate what to visualize... 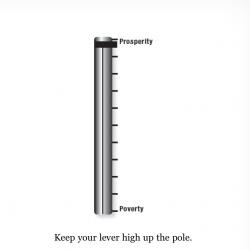 "If you worry about money or complain that you don’t have enough, your thoughts are toward the “Poverty” end of the pole. Consequently, that’s what you’ll attract. Even if you don’t seem to have money right now, you can use the Principle of Polarity to improve your financial situation. Imagine a lever sliding up and down the Money Pole.

To attract more money, you can adjust your vibration upward by visualizing that the lever is at the highest possible location along the pole. Since this pole is in your mind, it’s your creation; therefore, it’s your personal Money Pole. Even if you’re worried about money, you can mentally will the lever to move up higher."

That visualization can immediately attract windfalls of prosperity, provided that you monitor the lever’s position to ensure that it stays at the upper ends of the pole. If you have difficulty imagining prosperity, then mentally push the lever on the Money Pole to the highest position that you can imagine manifesting in reality. There’s no point in asking you to visualize something that you can’t accept as a real possibility.

Yet, any improvement in elevating your lever up the Money Pole will have a positive effect on your finances. This is true even if you can only imagine pushing your lever up one notch above its current position. Keep monitoring the Money Pole, and push the lever up as high as you feel comfortable. The minute that you believe that prosperity is possible, you’ll allow the lever to reach the top of the pole. Of course, you can also imagine a pole that controls your beliefs about money and other life areas. Keep your levers high atop these poles to release old, limiting beliefs about money, love, and such.

Everything that you desire has a pole assigned to it, whether it’s health, a happy marriage, inner peace, or any other topic. Imagine this whole series of poles with sliding levers, similar to a sound mixing board in a recording studio, or like an airplane’s control panel. Each of those levers controls your finances, relationships, health, and other life areas."

Here's a link to the full article...

"Believe In What You Want So Much, That It Has No Choice But To Materialize"

Here's to Being All In,